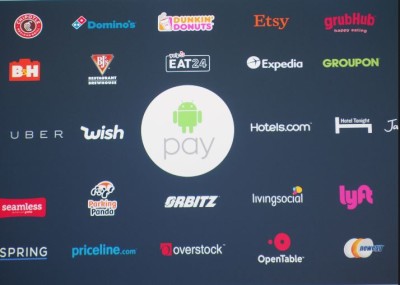 On May 28th, 2015 Google announced that it will be coming out with an Android Pay app by the third quarter of this year. While Android has had Near Field Communication (NFC) and card emulation for years, they were unable to gain support from key players in the industry such as; issuers, networks, and merchants. With the launch of Apple Pay and the increase in customer demand, these key players are now more ready and willing to form these relationships. Google is hopeful that with their new Android Pay app and the relationships they have built over the past year, they will be able to participate more competitively in the mobile payment space.

Google Wallet was the first mobile application created by Google. Google Wallet offers a tap and pay feature; however, this feature utilizes a PIN authentication system (Popper, 2015). A person uploads their card information to Google one time and then Google creates a virtual card that is used at the point of sale. In order to use Google Wallet, a person has to open the Wallet app and enter a pin number before waving their phone near the payment terminal.

In addition to Google Wallet, Google purchased some of Softcard’s (previously known as ISIS) technology. This purchase happened after Softcard had numerous complaints about incompatibility with Android phones and the process of using SIM cards. The joint venture founders of Softcard; Verizon Wireless, AT&T, and T-Mobile decided to close all customer accounts on March 31st 2015 and sell Google some of their technology. In addition, they told their customers to utilize Google Wallet (Popper, 2015).

Getting ready for Android Pay

According to Dave Burke, Google’s Vice President of Engineering for Android, “Android Pay will be focused on simplicity, security, and choice (DiPane, 2015).” Android Pay is built as an open platform which allows users to choose the easiest and most convenient way to install Android Pay (Rubin, 2015). “Google says that seven out of ten Android devices are ready for Android Pay and that 700,000 merchants can accept it in their stores today (Popper, 2015).”

In addition to payment processors, Google has negotiated with various issuers and network providers to help implement this mobile payment app.

Networks that Google is utilizing are American Express, Discover, MasterCard, and VISA.

The big difference between Apple Pay and Android Pay in terms of security is that Android Pay stores your encrypted data in the cloud and Apple Pay uses a Secure Element (a physical chip inside your phone) (McGarry, 2015).

With select retailers Android pay will offer loyalty programs and special offers to be automatically applied during checkout. So not only will the point of sale read your payment information, but your loyalty program discounts and offers (Bhat, 2015 ).

When it will arrive

Android Pay is speculated to launch with Android M in Quarter 3 of this year (Gordon, 2015).