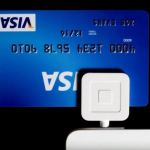 Square, which was launched by Jack Dorsey (co-founder of twitter) and Jim McKelvey in April 2010, has reportedly sold over one million readers in the market and processes about $30 billion annually (Stewart, 2014). Why has square been so successful in gaining clients?  Square has been successful in growing its clientele by offering ease of installation and flat rate pricing.  Square uses a flat rate of 2.75% for its clients, unless they are keying in transactions in which case the rate is 3.50%.  Included in this rate are the interchange and network fees as well as the fee you pay to Square.  While clients pay a flat rate per transaction, clients typically do not pay any start up, monthly, or annual fees.

Square is great for business owners who have low processing volume and low average ticket sales.  However, businesses processing more than $20,000 a year, or those which key in many transactions, or have fluctuations in volume or ticket size, should consider alternatives because 2.75% is likely not the best rate possible.  Not only is this not the best rate, but customers using Square have reportedly encountered numerous customer service and operational issues.  These issues include; the timing of funding, daily discounting instead of having monthly billing (Square discounts the processing fees prior to each deposit) and deposit limits and account holds.

Although Square has been successful in growing its client base, it is widely reported the company has struggled to obtain a positive cash flow.  The company supposedly lost $100 million in 2013 (Carr, 2014), with $20 million of this loss coming from its deal with Starbucks (Stewart, 2014).  The partnership with Starbucks provided a low rate to Starbucks and great visibility in the market for Square.  Included in this partnership was use of Square readers and Square wallet (a mobile app that allows customers to order via phone).  As of this year; however, Starbucks customers will only be able to order via the Starbucks app on their phones.  Square readers will still be used in Starbucks stores, but Square wallet will no longer be offered for Starbucks orders (Wakabayashi, 2014).

Despite this negative cash flow, Sarah Friar the CFO of Square is staying optimistic and has hopes that it’s other products: Square register, Square stand, Square wallet, Square order, Square market, Square cash, and Square credit will prove to become $100 million businesses (Carr, 2014).  In addition to these products, Square has reportedly been in discussions with Apple Pay and reportedly is developing NFC capable readers in order to accept Apple Pay sometime later this year (Petroff, 2014).